Soundproofing Noise From Above 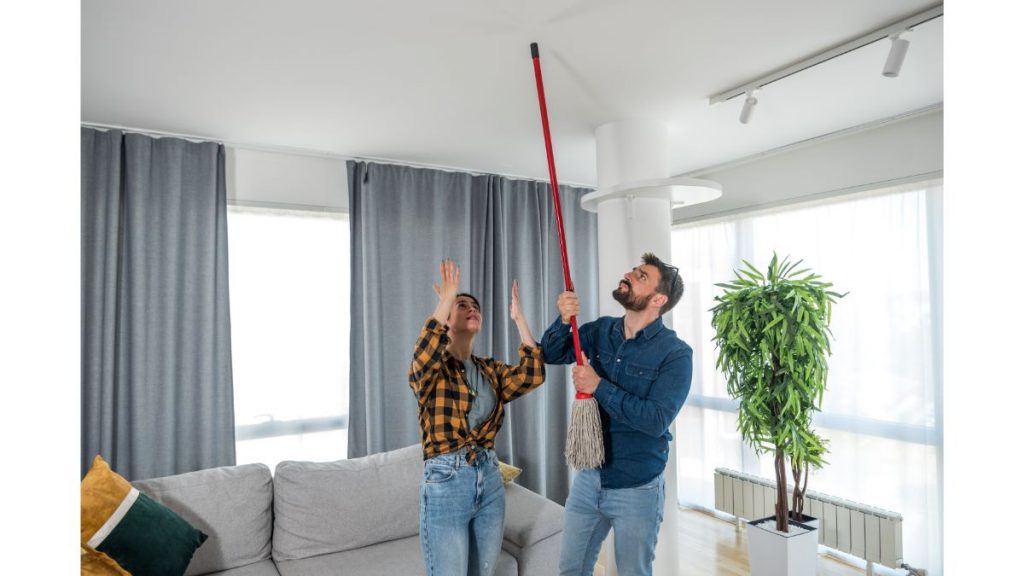 This is by far the most asked question throughout the entire Soundproofing Industry. It is a question asked by prominent architects, engineers, major developers, and contractors. We are now finding that this is also a major concern of individual homeowners, apartment dwellers, and condo owners alike. How do I soundproof a room from the noisy neighbors above?

Many factors need to be considered when assessing an upstairs noise issue. The first question you should ask is simply this, is the problem impact noise, or simply airborne noise (TV’s, Stereos, telephones etc.) traveling down from above. Nine times out of ten, impact noise is the main issue.

What is impact noise? It is the noise caused by people or animals walking across the floor above (generally hardwood). This type of noise is considered to be structure borne noise and is one of the most difficult noises there is to combat. Impact noise is simply sound that travels directly through the joisting structure of the floor above, directly into the hard mounted ceiling below. Another term for this is known as “foot fall “noise. Impact noise travels through the wooden structure at speeds of over 1200 times faster than the transmission of sound traveling through ambient air. Keep in mind that most home joisting systems as well as studded walls are generally 16 inches on center, so not only do you get the speed of the impact noise heading downward, but the perfectly spaced joists act as tuning forks thus causing the sound to sustain (last longer) compounding the impact problem tremendously. The best and most effective way to stop impact noise from above is to isolate the joist structure and the floor above (which is generally hardwood) from the ceiling below.

This can be accomplished in a variety of ways. It would be easy for you to have your neighbor put in a soundproof underlayment below their floor, but that is often not an option. The most common way to soundproof a ceiling is to float (suspend on acoustical clips or resilient channels) the ceiling using either resilient sound isolation clips and furring channels (hat channel) or the most common method of floating, RC-1 (resilient channel). The good, the bad, and the ugly of both these methods will be discussed in depth.

First we have the industry standard, which is RC-1 or resilient channel. This is a flanged material (generally with only one attaching smaller flange for the joists) and a larger flange to support the new floated drywall ceiling. RC-1 can be purchased from a drywall supply company, or a contractors supply house. The resilient channels are usually attached perpendicular to the joists and the rows are evenly spaced approximately 2′ to 2 ½’ apart. The longer flange (of resilient channels) in a ceiling application will all face the same direction to obtain maximum resilience in the new ceiling assembly. Remember, that the longer flange is the one the drywall screws into. Always use screws when you drywall, never use nails. Once the RC-1 is properly installed across the entire ceiling, you are ready to drywall. The new drywall will be screwed directly through the drywall and into the resilient channel’s (longer) 1″ flange. You will use 1 to 1 ½” self-tapping drywall screws or in rare cases, sheet metal screws.

If the new resilient (floated ceiling) is installed as per manufacturers instructions, there will be approximately a ¼” gap around the entire perimeter of the new floated ceiling. The new ceiling must never make direct contact with the adjoining walls. This is NOT negotiable folks. The ¼” gap will be filled in with an acoustical caulking materials, (OSI 175 is a good caulk for this application) and then finally the new ceiling will be taped, mudded, and painted just like a like a hard attached joist mounted drywall installation. The caulk is the interface between the resilient ceiling and the adjoining walls. There you have it, the common mans floated ceiling.

Basically you will need one sound clip for every 4 sq ft of ceiling area. For example, if your ceiling is 400 sq. ft. total, you will need 100 sound clips to complete the installation. Check with the manufacturers installations instructions for more detailed installation information. Once your have the sound clips screwed to the joists, you will then snap in the furring channel. We haven’t talked much about metal furring channels or “hat” channel, as they are commonly called, so let me briefly describe this material. Furring channel, or hat channel is a galvanized channel that is 7/8″ in height and measures 2 3/8″ from flange to flange. When using furring channels in conjunction with sound clips, you always want to purchase the 25 gauge channels as opposed to the 20 gauge, which is too stiff for this application. The furring channel will be compressed by hand and will snap perfectly into the joist mounted sound clips. The sound clips/furring channel rows will be spaced from 2′ to 3′ apart (check installation instructions). The first row will begin about 4″ from the adjoining wall and, as stated above, each row will be spaced from 2′ to 3′ apart.

Now comes the fun part! You will screw the drywall directly into the furring channel, keeping the screw as close to the center of the hat channel as possible. If the drywall meets directly in the middle of a channel, make sure to stagger the screws down the length of the drywalls (alternate them one each side of the seam).

Now, just like the RC-1 installation, you must maintain a ¼” gap around the perimeter of the newly floated ceiling assembly where the drywall does not touch the adjoining walls. Once again, this area will be sealed with the OSI-175 acoustical caulking material, and you will tape, mud, and paint the ceiling as usual. There we have it folks, professional sound isolation at a fraction of the cost that the “Big Boys” charge.

A good analogy of the floated ceiling method is to visualize your ceiling to now be a trampoline. The trampoline must not contact the adjoining walls and thus it is free to do its resilient thing exclusively. Keep in mind that the impact isolation is accomplished at the sound clip and joist connection where there is a thick neoprene rubber grommet on the clip that breaks the circuit between the sub floor above and the newly floated ceiling. There are additional products that can be added to this “floated” ceiling assembly including an Sound Isolation Tape for adding additional isolation to the metal channel in the sound clips. One can also add a layer of Mass Loaded Vinyl Barrier The American Mass Loaded Vinyl rolled soundproofing will add additional airborne sound protection to the assembly. Another additional product for sound proof walls to add would be Green Glue Sound Damping Compound. The Green Glue would be added if you were to put up two layers of drywall with the Sound Isolation Clips and furring channel. The RSIC clips can effectively handled up to two layers of 5/8″ sheetrock with Green Glue between them.